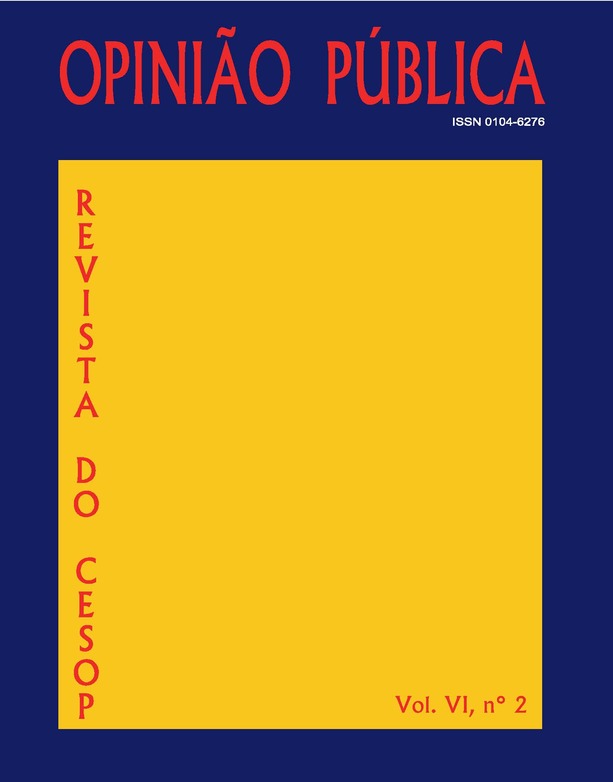 The Dialetics of Public Opinion: the reciprocal effects of public policy and public opinion in contemporary democratic societies

This paper examines the role played by public opinion at each stage of the policy process. By disaggregating policy making into a sequence of steps, it reveals if and where public opinion affects policy-making and where it cedes significance to other policy. As conclusion the paper underlines the dialectical nature of the public opinion and public policy relationship.

This article shows some evidences that the ideological content of the new right agenda is spread out amongst the public of the city of São Paulo. Such a particular phenomenon is further associated with a broader disposition, that is, the renewal of the right since the mid 1970s in advanced capitalist societies, and in Brazil at large since the late 1980s. The electoral success of the right seems to be associated to its capacity to renew itself and to present its own interests as though social demands. This hypothesis was tested in surveys conducted in the city of São Paulo in 1993 and 1995. The results of the first investigation indicate that the agenda of the more programmatic right is associated with the richer sectors of the society which, in general, support the neoliberal programme whilst being also anti-leftists. Amongst the poorer sectors however, there is more sensitivity towards topics related to morality and authoritarism, as well as statism.

Regional economic integration schemes abound in Latin America, yet very little is known about the degree of popular support for such programs. Now that democratic regimes rule in almost all of Latin America, public opinion can have an important impact on national policies. This paper examines the attitudes toward economic integration in 17 mainland Latin American countries with interview data from over 18,000 people. Perceived benefits of integration and perceptions of personal and national economic situation prove to be important factors, as are higher levels of education, support for democracy and gender. Two novel findings are that a positive opinion of the European Union along with satisfaction with the functioning of democracy are both linked to greater support for integration.

The purpose of this article is to analyze the relationship between political participation and electoral behavior. Empirical evidence comes from a survey conducted in São Paulo by the IBOPE in 1990. The main finding suggests that voting and left-wing trends are correlated. However, this finding does not exclude an association between rightist voting and political participation. In short, few modalities of participation are related to electoral behavior, and political apathy should be correlated with few credibility in politics as mechanism of representation and conflict management.