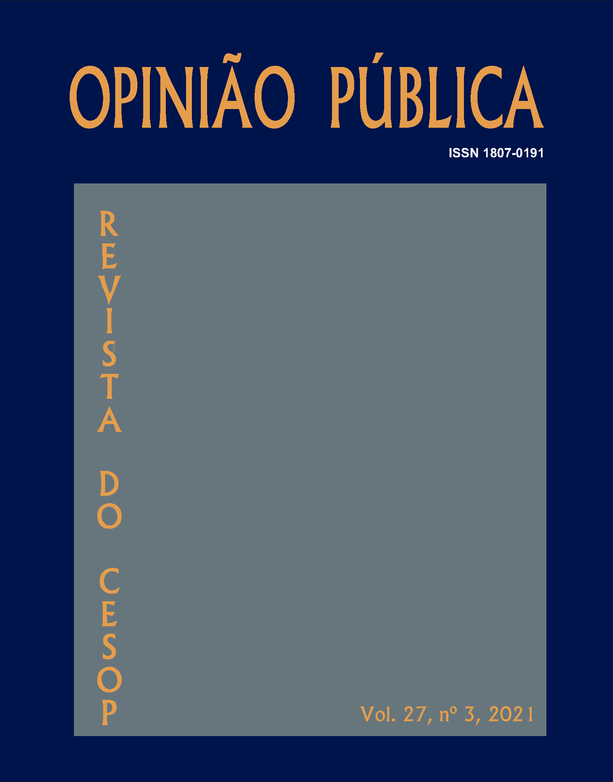 

The reactivation of the right in Brazil

What is the structure of the ideological predispositions of the Brazilian electorate and how are they affected by the strategies of the different political forces? The article seeks to show, based on data from Datafolha, that there was a continuity between what was observed right after the 1988 re-democratization and the thirty years that followed, namely, the preference for the right by the relative majority of the electorate in surveys of self-location on the ideological spectrum. Then, using the theoretical notion of activation, the article tests, based on research by Eseb, the hypothesis that, between 2006 and 2014, there was a tendency to disable ideological predispositions. The conclusion is that Lulism depolarized the political dispute and it was up to Bolsonaro, with a radical stance, to reactivate the conservatism in the 2018 election, when the right-wing field came to gather 45% of voters.

PDF
Why are Brazilians so interested in gun control? Putting the Multiple Streams Framework to the test

Gun control has been a relevant political issue in Brazil for over twenty years. The first goal of this article is to understand and explain this unusual prominence in the political agenda. The second is the empirical verification of a proposed modification for John Kingdon’s Multiple Streams Framework that may allow a more appropriate application to the Latin American context. Findings suggest that proponents of both gun control and gun liberalization were able to exploit the rise in homicides and their close relations to legislators and presidents to couple the streams together and systematically reintroduce the issue in the agenda. The process was marked by the strong influence of opposing interest groups, whereas political parties and public opinion played a secondary role. In consequence, the agenda-setting process mirrored a political stream that acknowledges how legislatures and political parties are frequently weak in Latin America, while special interests can have a major influence over executives that dominate policymaking.

PDF
Fear of crime: measuring the phenomenon and exploring its predictors in São Paulo city

This paper aims to contribute to theoretical and methodological discussions about the conceptualization, measurement, and identification of predictors of fear of crime in the Brazilian context. Based on survey data collected in São Paulo city in 2015, we worked with a fear of crime construct covering emotional, cognitive and behavioral dimensions. Using Multiple Regressions and Structural Equation Modeling we verify the relation between each one of these components and explanatory variables informed by individual aspects (sociodemographic variables) experiences of victimization (direct and indirect) and contextual aspects (perceptions of disorder and social cohesion). The results highlight the complex and multidetermined nature of the phenomenon studied and support the importance of a broader measurement perspective. The analysis also reveals the influence of predictors such as gender, perceived neighborhood disorder, low social cohesion, indirect victimization, age, education, and socioeconomic status.

PDF
The Labor Reform of 2017 and its effects: analysis of the procedural flow of TRT1

In 2017, the Consolidation of Labour Laws (CLT) underwent its greatest and most extensive change since 1943. Law 13,467 / 2017, known as the 2017 Labour Reform, changed about 120 articles of the CLT, substantially impacting the perception of rights, calculation of severance pay and general procedural aspects. This article is part of a broader research that sought to understand the impacts of the Labour Reform of 2017 on the procedural flow of the Regional Labour Court (TRT) of the 1st Region, from 2015 to 2019. The aim of the analysis was the investigation of the effects of the reform on the access of justice - with focus on the beneficiaries of free justice -, on the main issues of the cases, and on the values of the cause of the conviction. The reform's legislative trajectory was explained, followed by a discussion on some points of change in the text of the CLT. Through descriptive statistics techniques, we present the changes observed in the flow of processes and show that in addition to the drop in the number of cases, there is a change in the most common issues and in the values of causes and convictions.

The 2018 elections marked the emergence of important changes in the Brazilian political scenario with the election of Jair Bolsonaro to the Presidency, highlighting the perennial debate about the ideological classification of Brazilian parties. With this scenario, the main focus of this article is to analyze the economic plans of the four best-voted candidates (along with PSL’s Bolsonaro – PT’s Fernando Haddad, PDT’s Ciro Gomes and PSDB’s Geraldo Alckmin) based on content analysis, trying to allocate those political parties in the left-right scale. Based on this methodology, this paper differs from the predominant quantitative method used in papers with same focus. When it comes to economic plans, it was plausible to put the four parties in the traditional ideological scale: PSDB’s plan between center and right, with PT and PDT on the left, and 2018’s winner PSL on the right.

The 2018 election put Brazilian Free Electoral Broadcast Airtime in jeopardy. A candidate with only six seconds of radio and television free advertising time was elected president. Jair Bolsonaro's victory was not a unique phenomenon and candidates for state executives in the same situation were elected governors. But has the FEBA completely lost its relevance to the voter? To assess the degree of importance of the Brazilian model of electoral broadcast in the 2018 election, this article takes two different empirical approaches. The first analyzes the level of interest of FEBA based on its audience. The second measures the impact of exposure to election advertising on voters' level of knowledge in relation to the five most voted candidates for president. To this end, the article analyzes a series of polls carried out by the Datafolha Institute in the first round of the presidential elections in 2006, 2010, 2014, and 2018. The results show that voters' search for FEBA grew in 2018 in relation to the three previous elections and that watching election propaganda in 2018 contributed decisively to voters' level of knowledge about candidates. These findings highlight the importance of FEBA for Brazilian democracy.

PDF
Who is best represented? Congruence between members of the parliament and segments of the Brazilian electorate

An emerging line of research indicates that in many democracies members of the parliament under-represent certain groups. Hoping to expand this research agenda in Brazil, we analyzed whether the degree of congruence between preferences of representatives and voters varies across segments of the populace and, if so, which groups are best represented. Our expectation was that congruence would be smaller for socially disadvantaged groups, which have fewer resources for political participation and for the exercise of other forms of influence. We use the distance of preferences in voter-representative pairs (dyads), considered the most suitable measure for collective representation. Our analysis considers 11 issues in the period 2004-2014. The results confirm the expectation; notably, the representative advantage of the more educated seems to be greater than that of the more affluent.

The text analyzes the financing of party organizations in Brazil, from 1998 to 2016. Using descriptive statistics, we address the role of public resources, donations from private companies, contributions from members and parliamentarians. We question the applicability of the party cartelization thesis to the Brazilian case, showing that the public resource distribution model promotes fragmentation, not cartelization of the party system. We found that the private sector does not maintain organic links with parties that represent its interests, but acts pragmatically. It concentrates donations on the parties running for presidential elections, with ample advantage for the party that holds the presidency. Neither the affiliates nor the parliamentarians contribute significantly to the budget of the parties in Brazil.

This article is a case study about the PSDB's electoral and organizational trajectory in the state of São Paulo between 1994 and 2018. The aim is to identify how the political party maintains its dominance, with seven consecutive victories for the state government and greater number of city halls won among other parties since 1996. This work is based on the hypothesis that PSDB’s internal organization in São Paulo was essential for the party to remain dominant during the analyzed period. The methodology involved electoral data, thus we could measure the party's electoral success for the positions of councilor, mayor and governor, as well as interviews for an understanding of the party's strategies. The results show a party's organizational structure under strong institutionalization, with a state executive capable of inspecting all municipalities in the state, attending demands and showing itself as a present party to the electorate.

PDF
The United States think tanks and the production of ideas about Brazil as an emerging country, 2000-2016

The article analyzes the representations produced by American think tanks regarding Brazil between 2000 and 2016, a period of greater Brazilian external prominence and whose international projection represented an epistemic challenge for the Washington establishment. For that, the institutional panorama in which this ideational production was articulated and disseminated in the United States was depicted, and the methodology of content analysis was employed to investigate these publications and the interviews carried out with actors who operate in this environment. It is argued that this production fed a narrative of shared values in which Brazil would act in a convergent manner with the US in sharing the costs of maintaining order in regions such as South America and West Africa. However, the dissent regarding the principle of sovereignty and the role of the BRICS and the retraction of foreign policy, accentuated by the Brazilian domestic crisis, also engendered a narrative that emphasizes distrust of Brazilian capabilities and disappointment regarding its external protagonism.

PDF
Marcelo Caetano and his circumstance towards leadership: symbolic power, ambition and adaptation

This article presents a model of symbolic power accumulation to explain Marcelo Caetano’s political career and his progressive ambition towards the leadership of the Portuguese Estado Novo. This new model, with a reflexive and sociological basis, is applied to our case through an exercise of historical reconstruction of Marcelo's political path from his entrance in the corridors of power until his ascension to leadership in 1968. The article develops new theoretical arguments about the careers of political leaders and their objectives of obtaining political and social capital, especially the importance of accumulation of symbolic power in highly ideological and charismatic authoritarian regimes like the Estado Novo. Its main objective is to present a more sophisticated and relational vision of Marcelo Caetano's political path, namely by explaining the dilemma of charismatic succession with which he had to confront himself, and to contribute to the accumulation of theoretical and historical knowledge about the Portuguese authoritarian regime.

PDF
Campaign for the mayor of Bogotá (2019): agenda, arguments and tones of the debate on Twitter

This article characterizes top debates on Twitter Colombia about the campaign for the Mayor of Bogotá, 2019. For this, it concentrates on the analysis of the topics, the argumentative consistency and tones of the debates. The sample collected includes 51 Trending Topics (TT) and 503 tweets. The methodology used was content analysis. As a result, the high presence of Claudia López, winner of the contest, stands out. It is underlined the preponderance of the mainstream media as for positioning issues on Twitter's media agenda and its link with opinion leaders. The protagonism of citizens, who are at the center of the most critical debates, is highlighted. The discussions were marked by the transportation issue, a fact that suggests a conjunctural agenda. The persistence of fallacious enunciations in campaign discussions and that of the informative tone as one of the ways to construct messages in the tweets is verified, with some disqualifying, insulting and humorous variations, which suggest a negative debate on Twitter.