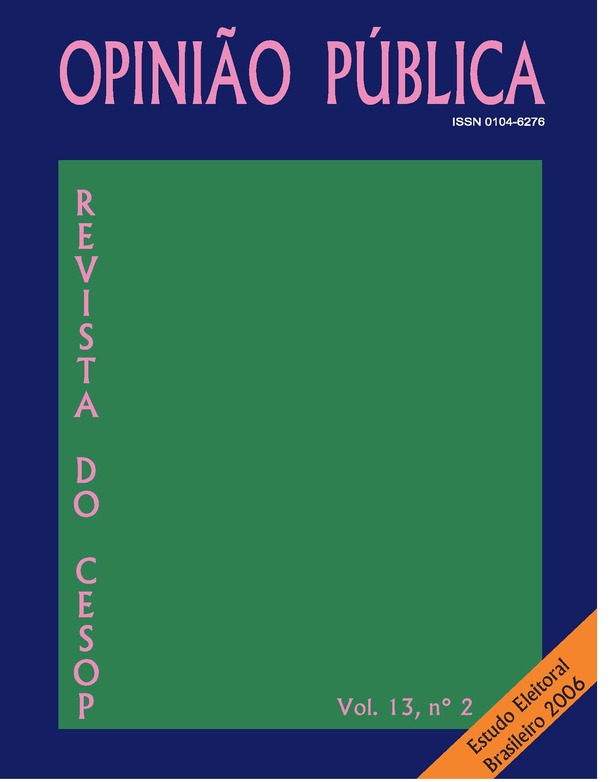 Elections and social capital: an analysis of Brazilian Presidential Elections

This article has as a main objective analyze the influence of electoral process (presidential) in time 1 (2002), in Brazil in the constitution or not of social capital in time 2 (2006), both in the institutional dimension, as well as its informal dimension. Based upon electoral data collected by ESEB (Electoral Studies in Brazil) we postulate the hypothesis that in economic and ethical adverse conditions, formal procedures do not influence the citizens formation of social capital and political empowerment, instead it generates negative predispositions in relation to politics. In these circumstances it prevails untrusty political culture, allowing the prevalence of factors in the electoral process. In this case, in the election and reelection of Lula in 2002 and 2006 respectively.

The article shows the impact of corruption scandals on the Brazilian voter’s choice in the 2006 Presidential election and it analyses if those individuals who have considered corruption the main Brazilian problem also did not vote for Lula. The article evaluates if and how the retrospective, ideological and partisan elements have influence on voting, as well as the circumstantial phenomena. Data shows that perceptions about corruption have more impact on the choice for candidates of political parties ideologically neighbors and have less impact on the choice for candidates of ideologically distant political parties. Therefore, the voter’s perceptions about economy, the Lula’s government performance and some partisan aspect were more important for the choice for President and have protected the candidate from the corruption’s accusations.

PDF
Class, ideology and politics: an interpretation of 2002 and 2006 election results

PDF
Ideological identification, parties and voting in the 2006 Presidential Elections

The article analyses the relations between the Brazilian voter’s ideological identification, his/her “partisan feelings” and the vote, in the 2002 and 2006 presidential elections. The main hypothesis tested, which is based on the two waves of the ESEB (Brazilian Electoral Study) data analysis, is that after President Lula’s first mandate there was a dilution of the ideological differences between the parties in the Brazilian voters view. This dilution would result in a smaller association between ideological identification and the vote in the 2006 presidential election compared to the 2002 election. The article also examines if there were changes in the association between the voters’ “partisan feelings” and their vote.

PDF
The voter’s perspective of the Brazilian parties: changes and continuities about party identification and evaluation of the main parties after 2002

The article analyses the changes and continuities related to the party identification and the party evaluation of the main four Brazilian parties: PT, PMDB,PSDB and PFL/DEM in 2002 and 2006. Data show a reduction in the party identification and the Worker’s Party as the one with the main reduction, although none of the other 3 parties have benefited of the reduction. The PMDB and the PT show the most significant changes in the voter’s social and demographic characteristics between elections. Finally, the analysis shows that the positive evaluation of the current government and the positive evaluation of the government party are variables strongly associated to the party evaluation.

The article verifies in what measure Brazilian parties have been important political tools for the formation of voting preferences. The data from ESEB2002 and ESEB2006 allow to analyse how voters evaluate parties as organizations, the links between parties and voters, and the role of socioeconomic and demographic variables in the explanation of the impact of parties in the formation of political preferences. The results show the negative evaluation of the parties in 2002 and 2006, and that in 2006 the political cleavage between government and opposition did not distinguish parties in the electoral process.