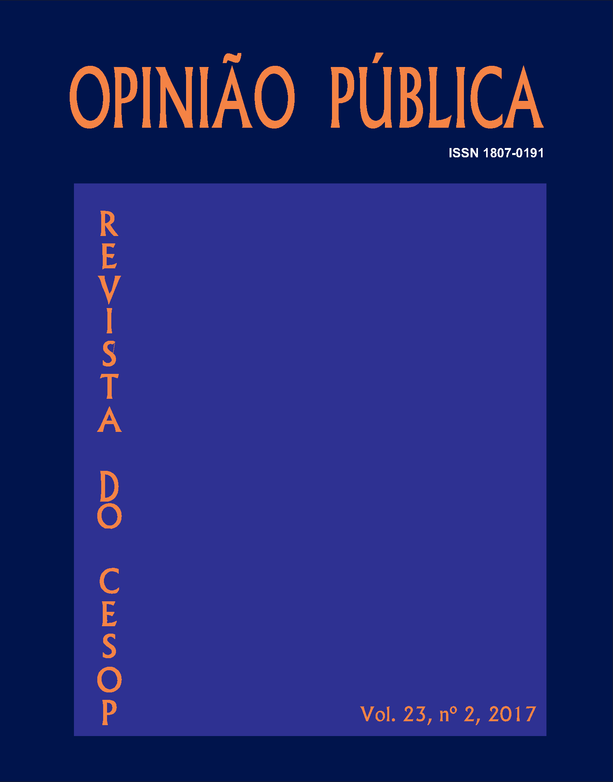 The article refers to a paradox that is present in Latin America and the Caribbean nowadays: on the one hand, adherence to democracy has increased exponentially; on the other hand, satisfaction with the system has decreased substantially. Could the temporal factor explain this contradiction? This article presents how the age of citizens and the democratic longevity of Latin American countries influence individual provisions regarding democracy in terms of diffuse and specific support. We applied factor analysis and a multivariate multilevel model. Our results provide evidence for the relationship between experience with the democratic regime and support for the most diffuse dimensions of legitimacy, but this has not been confirmed for the more specific dimensions.

PDF
Are dissatisfied democrats critical? Reevaluating the concept of the critical citizen

PDF
Asymmetric explanations for the distrust in political parties in Brazil

Why do Brazilians not trust political parties? This is the key question of this article. This work first analyzes the question by mobilizing the hypotheses advanced in the literature, comprehending rationalist and culturalist arguments. To answer it, we use data from a representative survey in Brazil conducted by Nupps/USP in 2014, executing ordinal logistic regressions. The results show, first, that evaluative hypotheses and interpersonal trust are the determinants of this attitude in the country and, second, that the effects of these hypotheses are asymmetrical, leading to remarks about the conceptual differences between distrust and trust in political parties in Brazil, promoting a better understanding of the dynamics of representation in the country.

Bolstered by studies in political sociology and dialoguing with theories on associativism and its relation to democracy, the present work aims at testing the efforts for the typification of the associative field, taking into account the adoption of political-institutional repertoires. Mobilizing the concept of associativism, along with the notion of a democratic ecology of associations, the paper aims at systematizing the results of a study on associations in the city of Florianópolis that breaks down their practices into two repertoires which, as yet, have been only minimally explored by studies on the social phenomenon of association. These are: the repertoire of action directed to the mobilization of rights, with emphasis on public civil actions (lawsuits), and the establishment of representation within city public-policy councils. In general, our data pointed to the important presence of associativism in the use of these repertoires, indicating that although the vast majority occupy seats in different city councils, a growing number of civil public actions have been filed by associations, in particular associations for the defense of rights. The data also indicate that different types of associations mobilize common repertoires, and despite variations in the mapped associative universe, labor organizations (trade unions and professional associations) and territory-based associations have used these two repertoires the most.

PDF
In the judicial network: an analysis of official data for drug indictments in Belo Horizonte (2008– 2015)

In this paper we intend to understand how the criminal courts in the city of Belo Horizonte apply the Drug Law (Law No. 11.343 / 2006). Taking into account the recognized limitations inherent to official records, our goal is to discuss the limits to and possibilities of understanding what happens to the suspects once they are in the judicial network, using the database of the Minas Gerais Court, which encompasses all procedures related to the Drug Law that were finalized in the capital between January 2008 and September 2015. We argue that courts specialized in drug crimes behave as a judicial assembly line, especially in cases in which the suspect has been caught red-handed, even if it means suppression of the defendant’s rights.

The formation of multiparty governments increases the risk of asymmetry of information between principals and agents so that the cabinet's policy conflicts are reflected in the behavior of parties in parliament. Several studies reveal that mutual control between cabinet parties is a way to compensate for the loss of information inherent in the delegation. While analysts often focus on the policy-making process, I argue that there is a more diverse set of strategies that allow parties to scrutinize policies implemented by their cabinet partners. To test this argument, I analyze the multiparty governments formed in Brazil between 1995 and 2014. I use network analysis and machine learning—Gibbs Sampling Method, Bayesian algorithm derived from Latent Dirichlet allocation (LDA)—to show that, in situations in which ministerial portfolios are distributed to actors with different policy preferences, parties intensify the use of Information Requirements (RIC), an important tool for horizontal control, to monitor the ministries, policies, and programs that interest them. The structure of the intra-cabinet control networks varies according to the importance of the ministries: the parties allocated in the ministries with the largest portion of the federal budget—those with the most resources for the implementation of public policies—are the actors with the greatest degree of centrality in the intra-cabinet mutual control networks.

PDF
The electoral debate on Facebook: comments from the audience on journalistic posts in the 2014 Brazilian presidential election

Interactive experiences online have been stimulating the development of public debate. Facebook, for example, has attracted citizens and institutions, as well as communication enterprises that see in this tool an opportunity for greater interaction with an audience. This paper identifies the characteristics of the debate among audiences in the official Facebook pages of the three main Brazilian newspapers (Folha de S.Paulo, O Estado de S.Paulo e O Globo) on the 2014 presidential election. Therefore, we have observed in 610.660 comments: 1) the debate’s intensity over time; 2) the commentator’s position (reciprocity); 3) justification; and 4) reflexivity. Among our main findings, one might highlight the predominance of monologues and the low level of justification. However, Facebook can be considered a space for persuasion, which prevailed in the comments.

PDF
People, politics, and communication: the reception of the discourse of president Rafael Correa

This article analyzes the political communication dispositive called Enlace Ciudadano led weekly by the president of Ecuador Rafael Correa, which is broadcasted by radio and television in order to characterize the meanings that citizens build about the government´s actions, Correa’s relationship with the media, his way of communicating in the political space, his proposals, and his relations with other political actors, both those aligned with and in opposition to the government. Through a qualitative study that combines discourse analysis and reception studies, the presidential discourse was found to promote the generation of new meanings and ways of thinking about politics and the relationship between citizens and the government and media. The article shows citizens’ different rationalities and interpretations—citizens who are both the target and active receptors of the political discourse. The results provide some key elements about the processes that are the basis of the rootedness that presidents pejoratively called “populist,” like Rafael Correa, have achieved among their countries’ population, particularly in the economically and socially disadvantaged sectors. These elements contribute to the constitution of subjectivities that recognize the value of identity, rights, self-esteem, and the necessity of more equal relationships, while also leaving a door open to different ways of thinking and political confrontation. Moreover, the article contributes to the discussion around the political meaning of common sense in the configuration of hegemony in the contemporary context characterized by the mediatization of politics.

The European Union delegates to the European Commission the exclusive power to initiate legislation, which allows an autonomous organization guided by expertise to have institutional legitimacy to propose laws that counteract the interests of national governments. By analyzing the voluntary resignation of the Santer Commission and the nomination process for the Barroso Commission, this paper identifies the empowerment of the European Parliament, especially when it oversees the European Commission as an ex-ante control when confirming the commissioners, whereas the ex-post control has been delegated to the president of the Commission, who has become an important actor in the management of crises.