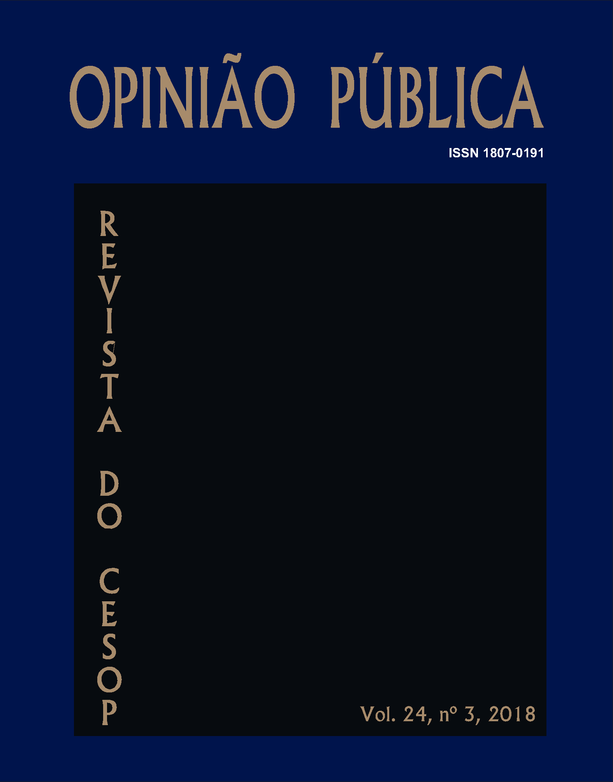 The end of the embarrassed right? The actions of the “evangelical” and “bullet” caucuses and the paths of conservative representation in Brazil

In the last few years, the reaction of right-wing/conservative groups towards “progressive agendas” has become one of the topics that has sparked the greatest interest among Brazilian researchers in the field of Political Science. This article seeks to contribute to the debate, analyzing the activity of leaders in the Lower House who are tied to the main vectors of this conservative agenda: the “evangelical” and “bullet” caucuses. Therefore, this article examines the speeches and bills formulated by congressmen between 2010 and 2017 arguing that, if it's too soon to state that the “embarrassed right” phenomena is losing strength in the Lower House, it is feasible to suggest that there is a group of representatives gaining significance who are active and ideological, who are relatively disconnected from the traditional political families in Brazil, and who are able to openly mobilize identity categories associated with the right and/or conservatism.

PDF
Gender and humor in social networks: the campaign against Dilma Rousseff in Brazil

This article has as an analytical corpus a set of 69 memes opposed to Dilma Rousseff that viralized in the Brazilian web between the period of June 2014 and August 2016 and investigates the contents mobilized during the public campaign in favor of the parliamentary coup occurred in Brazil in 2016. The analysis of these productions, as tools in the political disputes that culminated in the coup, is a way of interpreting the contemporary dynamics of Brazilian politics and the very place given to the figure of women and the feminine in public space. The collected memes show that comedy is built largely on gender inequalities and by not problematizing such an underlying framework we reinforce it. As an analytical strategy, we propose the classification of memes into four interpretive keys inspired by feminist political theory: (1) Depersonalization or invisibility, (2) Humiliation or ridicule, (3) Objectification or sexualization, and (4) Aggression or violence. By identifying the devices that support comedy from shared discursive parameters, the research demonstrates how the generalized dimension of political humor has mobilized sexist and misogynist stereotypes that have not only struck Dilma Rousseff but have reinforced the very symbolic place of women in national politics.

PDF
The first major antagonism between PSDB and PT

The objective of this article is to demonstrate the antagonistic construction between the discourses produced by the PSDB and PT candidacies during the HGPE television broadcast of the 1994 presidential election, which resulted in the Real Plan being posited as the nodal point of this conflict. We realize that the dimension of antagonism identified in this conflict zone allows voters greater access to information on the candidatures in dispute over the Presidency of the Republic, given its deconstructive character. Therefore, there are two main reasons that justify this study’s focus on the past: a) this moment can be read as the first great antagonism between the PSDB and PT parties, and b) little or no attention has been paid to studies involving the antagonistic dimension of the HGPE, which may illuminate yet another aspect of the voter's vote choice. This work uses the theoretical and methodological aspects of Laclau and Mouffe's discourse theory to emphasize the concepts of discourse and antagonism essential to capturing the discursive meanings demonstrated here. We conclude, therefore, that the 1994 election marked the first major antagonism between PSDB and PT.

PDF
Inframunicipalism and clientelism. Approaches to the phenomenon based on its related practices

This article maintains that, from the institutionalist perspective, the characteristics of a political system and the local public administration condition the development of clientelistic practices. This research aims to shed light on the controversial relationship between vote buying and the district`s size in Spain as well as to prove how the population size has implications beyond the financial and administrative dimension. In this sense, the objective is to introduce to the debate the effects of inframunicipalism on the quality of democracy. Toward that end, some practices associated with clientelism are identified that are related to the size of the habitat in a series of surveys by the Center for Sociological Research (CIS). Thus, regression techniques have been used to determine what these practices are and what impact they have. The main finding emphasizes that the likelihood of clientelistic relationships (measured by several indicators) increases as the size of the habitat decreases.

The central aim of this research is to demonstrate that the local (sociodemographic and institutional) context helps explain changes in voters’ vote choice in support of different political parties. This research analyzes the electoral volatility index for local legislators in four municipal elections—2000, 2004, 2008, 2012 and 2016—with a sample of all Brazilian cities. This work contributes to the literature about both electoral behavior and party systems. The results show that the contextual variables have a more intense effect in small municipalities and at the beginning of the analyzed period.

PDF
Sortition in politics: how minipublics are transforming democracy

This article analyzes the use of sortition in politics from a genealogical and contemporary perspective. It aims to reflect on this mechanism, little known in Latin America, which randomly selects citizens to make decisions. The article shows how this idea originated in ancient Greece and was later used in Renaissance Italy, until it was rejected by the modern republics. It shows how selection by lot was rescued in the 1970s amid debates about the crisis of representation and the rise of deliberative democracy, presenting as a novelty the use of the representative sample, as in citizen juries, planning cells, and deliberative opinion polls. The article reveals the dynamics surrounding these minipublics and the field of experimentation that has stemmed from them. It analyzes the criticisms that these mechanisms have received, especially as regards skepticism about the knowledge of ordinary citizens and the fact that random selection prevents the spontaneous participation of society. Recent examples are presented, such as participatory budgeting in Berlin and the Irish constitutional amendment, which provide an empirical basis not only to counter such arguments, but to show that sortition has become a viable alternative in politics.