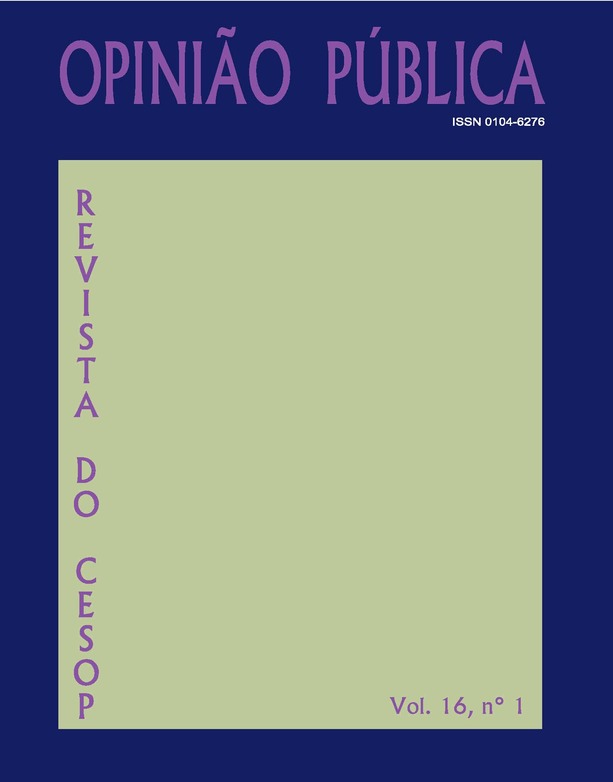 The covariants of political trust in Latin America

Culturalist approaches, based on factors related to socialization, and institutionalist one, based on factors related to experience with the political system, compete for the explanation of the factors related to low levels of political trust in Latin America. This paper briefly reviews these two approaches and compares their predictive power to explain political trust in the region. Using data from Latinobarometro 2005, the technique of hierarchical linear model it was applied with the purpose of considering the dependence among observations at country level. The political trust is higher among those who support the president; among those who are in countries that are considered the most democratic; individuals who positively evaluate the economic situation, public policies and government capacity to combat corruption; individuals with greater political sophistication. The cultural variables, interpersonal trust and the assessment of co-citizens also enhance political trust, but have much smaller effect than the institutional variables.

The article tests at the individual level and for a group of four Latinamerican countries the hypothesis proposed by the defenders of the theory of the human development about the association between postmaterialist values and a participative posture. Using data from the World Values Survey we verify the validity of this in that measured that statement in the context of nations with economics and materials problems and characterized as young democracies. Using techniques of bivariate and multivariate analysis we verifyed that among publics of those countries the participation is more influenced by variables related to the citizens' social centrality than by changes in their value’s priorities, what leads to the conclusion that the explanatory model suggested by Inglehart is problematic to Latinamerica contexts and should be criticized.

This article analyzes the tolerance to the breaches of the norm in Medellin and municipalities in Metropolitan Area. For this purpose, we use data from the study about magnitude, distribution and factors associated with violence in Metropolitan Area of Medellin that was conducted in 2004 to ten of its municipalities. In this study was estimated the magnitude of this important risk factor for violence on society. Results emphasize that the standardized indicators of anomie and legitimacy to the breach of the rule are surprisingly high in all municipalities in the Metropolitan Area of Medellin, for both men and women, although most prevalent among men, children and youth. Sociological arguments are presented to provide elements that explain the presence and characteristics of this phenomenon and the factors that motivate a person to cause an incident that contributes to this phenomenon. Among the explanatory values are mentioned both inadequate and lack of certain cultural values, the result of sociocultural constraints and economic situation as individual rationality.

PDF
Disputes and adjustments in the making of the electoral agenda: the media covering of the “Bolsa Família” Program and the 2006 election

This article presents an analysis of the news about an important social program maintained by the federal government, Programa Bolsa Família, in the period of brazilian major elections of 2006. The study is based in 166 texts published in the newspapers O Globo, O Estado de São Paulo, Folha de São Paulo e Valor Econômico between September 1st and October 31st. We discuss the production of electoral agenda, observing disputes, adjustments and acommodations that constitute news coverage. The analysis of voices and framings in the texts leads to the observation of relevant aspects of the relations between media and politics at that moment. Conclusions underline the low plurality in press coverage, connected to representations of the elections of 2006 and Brazilian democracy that include stigmatization of low income voters and beneficiaries of social programs.

PDF
The constraints to the offer of digital mechanisms of participation

The article examines the difficulties faced by government projects aimed at fostering citizens’ political participation by using the Internet. After presenting the participatory tools found on two institutional websites (the Brazilian Presidency and the House of Representatives), I examine how the constraints pointed out by a relevant part of the literature in e-participation are reflected on such initiatives. The discussion grounded on empirical evidences highlights the argument that promoting online participation needs more than providing communication resources, since civic culture and other issues are still key factors in influencing our patterns of political involvement. A participatory use of digital tools will then depend more on circumstances such as institutional willingness than on the technical mechanisms available.

PDF
Political information and attitudes about the Brazilian public expenditure and taxes: evidences based on a public opinion survey

We know that Brazilian citizens, just like those living in other democracies of the world, know very little about politics. We know less, however, about the consequences of political ignorance on the democratic process? Some scholars argue that the lack of political information has minimal effect of people’s political attitudes and behaviors. Others, however, claim that the effects are substantial. In this paper, we examine this question using a survey-experiment conducted in Brazil in 2004. Specifically, we explore how information about the federal government affects attitudes toward government spending and taxing policies. The experiment has a control group and a treatment group where subjects in the latter were provided political information before measuring their preferred level of government spending and taxing. Results indicate that those who received political information tended to prefer less government spending and taxing, as compared to those who did not receive any information. These results carry important implications for the democratic process because they indicate that a more knowledgeable Brazilian electorate would hold different political preferences.

PDF
Vision beyond reach: introduction to the factor analysis

How do we measure phenomena that cannot be directly observed? The principal aim of this paper is to demonstrate why factor analysis technique is the best answer to this question. Methodologically, we use a database with different indicators of democracy to show how principal component analysis can be employed to measure the two polyarchy dimensions proposed by Robert Dahl (1971): contestation and inclusiveness. On substantive grounds, we hope to facilitate the understanding of factor analysis technique in Social Sciences in general and in Political Science in particular.

PDF
The duality of the political, social and familiar insertion of the elderly: comparative study of Brazil, Spain and United States

The paper presents a comparative study of social, political, economical, and health situation of aged population of Brazil, Spain, and United States. A discussion was made about changing process in age structure base don literature of the three countries. Data analysis confirmed improvements in aged people life conditions, and changing on social insertion and political and moral attitudes. Data indicated also that there are no similarities or differences among the countries which can be attributed to economic conditions, nor to cultural traditions. The duality expresses a transition in this segment, traditionally viewed in a negative way and, nowadays, also considered as economic and familiar support. The perspectives are that the aged people positive social role will be emphasized by naturalization of aging and by establishing de analytic references on aging itself.

PDF
The politics of defense in Brazil: the public policy point of view

This article analyzes defense policy in Brazil as a public policy. Methodologically, a benchmarking of concepts was made and the information obtained was treated in a qualitative manner. Information and data needed to understanding national defense as a public good to be provided by the state were prospected from public policy bibliography. The notion of integrating different knowledge areas is present in the whole research permanently as well in the conclusions related to the need of integrating diverse branchs of the society. The search for and the understanding of defense policy public as a public good demand to overcome biased concepts and to analyze defense with the use of public policy tools.