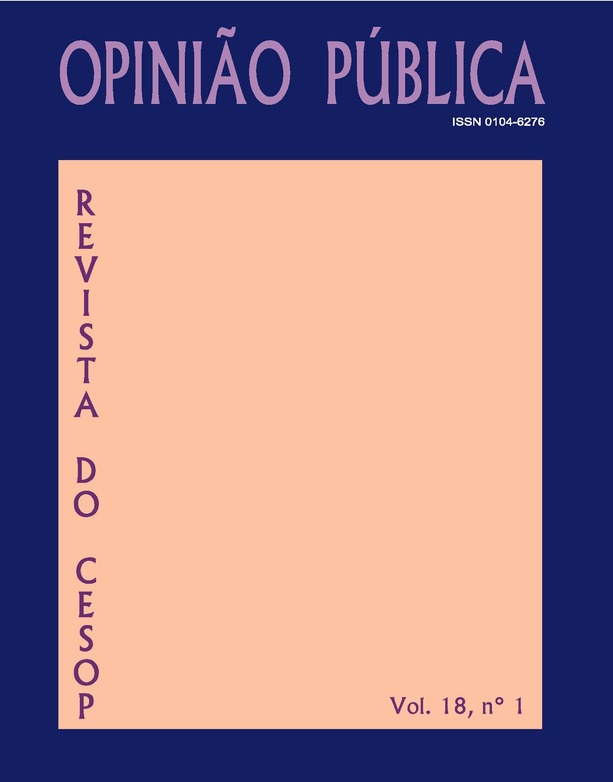 The “voteless” of the Brazilian Legislative: the Substitute Senators and their impact on the legislative process

This article has two main objectives. The first one is to create a profile of Senators’ substitutes, compared to the elected Senators. The second objective is to investigate the substitutes’ political performance, with the intent of evaluating the impact of their actions on both the functioning of the Senate and their relationship to the Executive Power. We suggest that, because they are not directly elected, they are selected to work on difficult tasks, especially those that could bring negative political effects to the Senators, which depend on the electorate’s vote. We also found that the substitutes give a bit more support to the Presidency, particularly observed in right wing parties coalitions.

PDF
Pride and prejudice: the 'objectivity' as a mediator between journalism and its public

The article discusses the value of “objectivity” for journalistic discourses and practices. The analysis of Brazilian weekly news magazines confirms the comprehension that the ideal of objectivity and the assertion of moral values do not exclude each other: “objective facts” and judgments are complementary in legitimating journalism as the guardian of social values. The sharing of social positions - and prejudgments - between journalists and their public allows specific perspectives and interests to be voiced as if they equal the totality, naturalizing a pattern of values and making judgments into facts. In journalism, neutrality corresponds to the validation of hegemonic discourses.

PDF
Voting on the shelf: the politicization of consumption in Latin America

For over a decade, the use of consumer decision seeking the accomplishment of political or ethical goals has been extensively debated by international social sciences. Confronting social capital decline and political demobilization theories, the acknowledgement of political consumerism as a novel and rising mode of non-conventional individual participation in politics has helped to redefine the terms of discussion on civic engagement while also bridging the gap between citizenship and the traditional public sphere of politics, on one side, and consumption and the private sphere of market agents, on the other. Yet, such debate has hardly begun for Latin America, not to speak of pursuing an empirical discussion. This article reviews empirical evidence about the politicization of the relationships between consumers and business substantiated upon the adoption of politically motivated purchases or boycotts of brands and products based on social and environmental values or policy preferences. Research is grounded on representative sample surveys conducted in Argentina, Brazil and Mexico. Results indicate that political consumerism is a fairly stable phenomenon and it enlarges (rather than redefines) the repertoires of political action in Latin America.

This paper analyses some of the critics that were directed to the theories of deliberative democracy, in order to rescue the idea of conflict as a crucial component for the development of contemporary democracies. These theories have contributed to a theoretical breakthrough on the issues of political inclusion, recognizing the importance of political autonomy and expansion of formal equality. Despite these advances, theories of deliberative democracy have become the object of criticism in the last decade, due to the excessive emphasis on consensus, which eventually eclipsed other forms of political action, such as contentious politics. In this paper I attempt to reinforce the idea of conflict as a decisive element for the development of our democracies. In this sense, I promote a dialogue between the theories of deliberative democracy and the theory of political processes, which has as it’s central focus the analysis of the relationship among collective actors, contentious politics and the political context.

PDF
Attitudes, cognition and political participation: patterns of influences of socialization environments on the political profile of young people

The debate about the role of socialization in the acquisition of political knowledge, attitudes and participation of young people reminds us constantly that the family and school environments are the crucial factor in this process. But this does not answer a number of questions. One of them is the interaction between the various factors that comprise these environments and the specific mechanisms through which they generate effects on the political profile of young people. This dynamic is the focus of this article and our main argument is that it creates distinct patterns of influence of these environments, depending on the dimension considered. Our analyzes are based on data from a survey conducted in 2008 with high school students of the city of Belo Horizonte, Brazil.

The principal aim of this paper is to provide a intuitive introduction to cluster analysis. Methodologically, we use data from Coppedge, Alvarez e Maldonado (2008) regarding the two dimensions of polyarchy proposed by Dahl (1971): contestation and inclusiveness. Based on these dimensions we classify political regimes in different groups (clusters) according to their similarity level. On substantive grounds, we hope to suggest a methodological tool to classify political regimes and facilitate the understanding of cluster analysis in Political Science.

PDF
Social capital and participation, a perspective from the Southern Cone of America

This study presents evidence on citizen participation and social capital (SC) in three South American cases - Porto Alegre, Montevideo and Santiago of Chile, in order to revitalize the debate on public opinion, political culture and SC. The study has the following assumptions: the SC is the output of rational decisions of individuals and political designs and institutions and political culture have an impact on those decisions. Using a utility model, survey data and information, I analyze information on associative life and trust, and other socio-economic, demographic and political information. The conclusions: in the mid-2000s, Montevideo, Porto Alegre and Santiago de Chile had a stock of SC equivalent to that of developed societies; in those cities, and by extension, countries, political and institutional factors and political culture had an effect on trust and the willingness of people to take part in associative life, in relation to different contexts and situations of participation. In the more disaggregated analysis of the case of Chile on local level, the same relationships are observed.

PDF
Are the Chileans equally solidary? The influence of personal resources in cash donations

In the public discourse it is commonly assumed that Chile is a solidary country, an assumption that is mixed with the idea of homogeneity in the country as far as helping behavior and solidarity values is concerned. The present paper is aimed at challenging this homogeneity assumption by proposing that helping behavior is associated to personal resources, which at the same time are linked to the position in the social stratification structure. Using data from the Solidarity Survey implemented by the assessment center MIDE UC of the Pontificia Universidad Católica de Chile in 2009, the paper focuses on a specific type of helping behavior: money donations. The analysis centers on the influence of personal resources such as income, education and networks on this kind of donations. Results indicate that individuals with greater resources are more given to donate, whereby the educational level plays a key role.

PDF
Electoral financing, political representation and gender: an analysis of the 2006 elections

This article compares campaign revenue of female and male candidates to the positions of Federal and State Deputies in the elections of 2006, in Brazil. Based on analysis of disaggregated statistical data by sex, provided by the Superior Electoral Tribunal, it was considered if women and men raise different amounts of campaign revenue, and the extent to which this might constitute an explaining factor for women´s low electoral performance. Data provide evidence that women have campaign revenues significantly smaller than men and that given the existing high correlation between campaign finance and electoral success, this may constitute a central element in explaining their low performance in elections.

PDF
The 2009 Elections in Uruguay:permanence of the political loyalties and electoral accountability

This paper inquires about the main characteristics of voting behavior in uruguayan national elections in 2009. Using a probit analysis based on an election poll it is found that government management, perception of economy and ideological issues play an important role in this election characterized by low volatility. These findings indicate strong party loyalties aggregated in “ideological families” as well as evaluative aspects about political and economic performance that determine the Uruguayan vote.

This article focuses on the social structure of the interviewed that practiced nonresponse item in a survey on political issues. For this was carried out a survey with 2.010 young voters of public schools in Belém (PA). The share of non response increase with the change of one life-cycle to another one or with the proper experience gained by the effects of the public politics, what leaves the interviewed in doubt in relation to the values and opinions established.