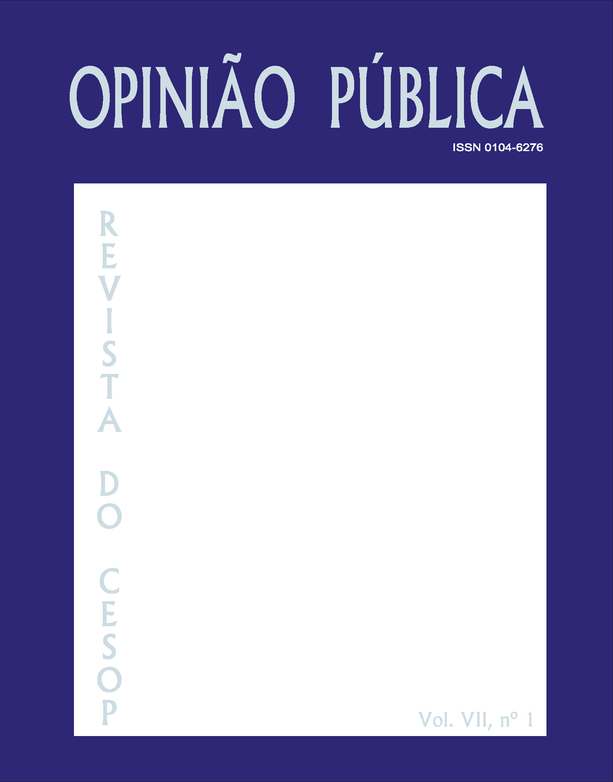 This paper discusses the use of qualitative research technie to the study Political Science and to the Political Marketing. The issues discussed here drawn from the research on Political Ideology, Electoral Propaganda and Votes: the effect of “horário electoral” on the presidency campaign, in which were used depth interviews and focus group technies.

PDF
Political Apathy and Alienation in a Stalemate Society: the limits of the new chilean democracy

The notion of a “stalemate society” used here to describe contemporary Chilean democracy is meant to suggest a particular political system where the likelihood of significant change resulting through elections and bargaining has been reduced to a minimum. Given restrictive political provisions imposed by the Pinochet military regime upon the new democracy such as the constitutionally-sanctioned appointed Institutional Senators and the “binomial” election law which dramatically over-represents the largest minority group one can argue that political power was meant to be almost equally divided between those center and center-left forces grouped in the Concertación coalition and those opposing them on the political right, in seeming disregard of what the voters wanted. What is raised as the central question for examination in this essay relates to the likely effects such entrenched political immobilism may have had on Chileans as they became aware that the political forces representing a popular majority had only a limited ability to achieve the changes sought. The type of effect suggested here focuses on existing political apathy and alienation.

PDF
The Role of Public Opinion Surveys in the Process of Democratic Consolidation: the Latin American experience

Since the beginning of the eighties the political surveys in Latin America have a central role in the process of democratization. Almost everyday the main newspapers and tv broadcastings of each country inform us the results of studies that focuses on the political development of the new democracies. Most of what we know about these democracies is due to these studies. But what are the consequences of this role? This article argues that the public opinion surveys define central interactions between the political elites and the citizenship in these countries, and that they have a central role in their democratization processes.

PDF
The Effects of Repression, Political Violence, and Pain and Loss on Social Capital in Central America

State repression seeks to dissuade citizens from opposing the regime and its programs, and to bend civil society and social capital to regime purposes. Such repression may range from lesser forms of coercion and intimidation to the extreme infliction of physical pain upon citizens. Insurgents, too, may repress and inflict pain upon citizens and thus shape their behavior and attitudes. Central American states and their opponents in the 1980s and early 1990s employed widely varying levels of repression and political violence. Individuals within these nations differentially perceived violence and experienced varying levels of pain and loss stemming from it. Using 1990s survey data from six Central American nations to examine the effects of repression, perceived political violence, and resultant pain and loss upon social capital, we find that repression at the systemic level and the perception of political violence significantly affect civil society (group involvement) and varieties of social capital (political participation, democratic and antidemocratic norms, alienation from elections, and willingness to employ confrontational political tactics). The effects of pain and loss are less clear. While repression seeks to constrain participation and mold compliant norms, its effects in Central America are complex and sometimes inconsistent with such goals because it promotes increased communal level organization and certain confrontational forms of social capital.