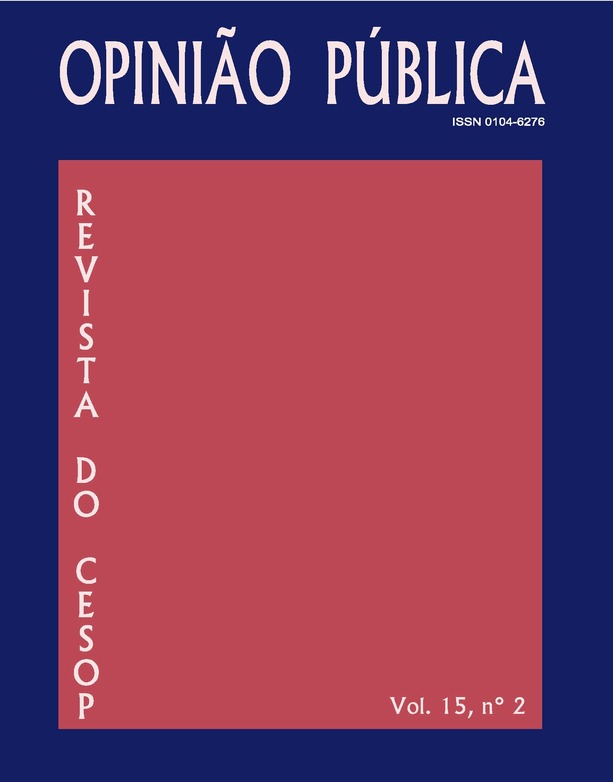 A number of scholars do not examine racial group identity among Afro-Brazilians because of Brazil’s history as a racially mixed nation. Given the growing strength of the black movements and the enactment of racial policies such as affirmative action that presume the existence of racial groups it is necessary to examine if racial group identity is salient. Using original survey data collected in 2006 in Salvador and São Paulo, Brazil, there is evidence that an overwhelming majority of Afro-Brazilians in identify as a racial group. Furthermore, there is a positive and statistically significant relationship between identifying as a racial group and voting for black politicians in Salvador but not in São Paulo.

Women occupy less than 10% of seats in the Chamber of Deputies and the Brazilian situation contrasts with an international trend of growth in the political representation of women. In dealing with this issue, this article considers cultural factors, in particular those related to the political culture and social capital. Using data from a national survey of 2006, the article analyses how social capital are structured by gender and considers the likely implication of this factor for men and women's political representation. Results indicate that men and women participate in different types of associations. Men tend to organize themselves into social groups more geared towards the public sphere whereas women involve themselves in groups which deal with practical daily issues related to the family and community life.

The paper is about perceptions of Brazilian society concerning the cash transfer program Bolsa Família of Brazilian government obtained in a national survey. It indicated that population recognizes the program and understands that it is being used in an appropriated way, even though considering problems in its execution. Important differences occurred in the opinion of those who knew beneficiaries comparing with those who didn’t. The first group manifested positive opinion and criticized less then the second. The paper concludes that the program acquired legitimacy in the Brazilian society, considering the knowledge of this policy and supporting its existence. It argues for the importance of searching and considering the public opinion as a fundamental element of public policy assessing.

This paper examines the incidence of liberal and “illiberal” democracy in Latin America from 1978 through 2004. It demonstrates, first, that illiberal democracy - which combines free and fair elections with systematic constraints on civil liberties - has become the norm throughout the region. Second, it shows that regime transitions have most often ended not in liberal democracy, but in illiberal democracy. Third, rare events logit analysis reveals that three variables - hyperinflation, general strikes, and presidential elections - have had significant impact on transitions toward fuller democracy. As a form of short-term economic shock, hyperinflation generates widespread discontent which sometimes results in general strikes; given the opportunity to vote, citizens elect reformist opposition candidates who, once in office, remove controls on civil liberties. This scenario substantially increases the likelihood of transition from illiberal to liberal democracy.

PDF
Tolerance on corruption in Brazil: a contradiction among moral norms and social practice

This article addresses the issue of corruption in Brazil and comes from the contradiction, existing within the Brazilian public opinion, between moral obligations and the meanings of political corruption. The article discusses the concept of corruption and how it is built in Brazil, and also builds a theoretical perspective on corruption through empirical analysis. It is based on the results of the survey on corruption, conducted in year 2008.

PDF
The judicialization of political competition: the Superior Electoral Court and electoral coalitions

There is an extensive literature to study the effects of the judiciary power on how political systems work. Is there a judicialization of politics? Our point is that the answer to that question is connected to theoretical questions about the ways to prove and where scholars should look in order to detect the effect of judiciary in democratic systems. In this work we analyze the judicialization of politics under the perspective of the definition of the rules of electoral competition. In order to prove our argument, this article studies how TSE (brazilian judiciary court) rules coalitions in Brazil’s political system, known as “verticalização” _the uniformity of party coalitions at state and federal levels. Our case study shows that TSE, in fact, not only interprets the law but, actually, establishes rules, taking the place of the legislative body _which, in turn, made another move. The analysis suggests that the question of judiciary of politics should be seen as an strategic interaction between the two powers.

PDF
Voting and social class: notes of some recent studies

This article aims to provide an approach on a possible inflexion ongoing in contemporary electoral comparative studies, challenging the consensus reached in the 1980s and 1990s around the idea of the loss of the relative importance of social divisions and, in particular, classists, as the explanatory variable of electoral behavior in advanced democracies. In that sense, the text presents and discusses samples of recent international studies that converge on the revaluation of social class as a source of guidance on vote. It is pointed out the attributed importance by this new literature on the methodologic question and in the review of empirical information collected in the last decades by vote, especially some of the results that suggest a new understanding of the relationship between class and suffrage in mature democracies.

PDF
Media and politics: the agenda for the reduction of criminal majority in the House of Representatives

The article relates the processes and the effects among media vehicles and public policy propositions about the reduction of adult age penalty in Brazil. Based on the analysis of the newspaper Folha de São Paulo and the magazine Veja, it relates the repercussion of two crimes of great impact ocurred in 2003 and 2007 and their influence on the legislative processo of proposals of amendments to the Constitution.