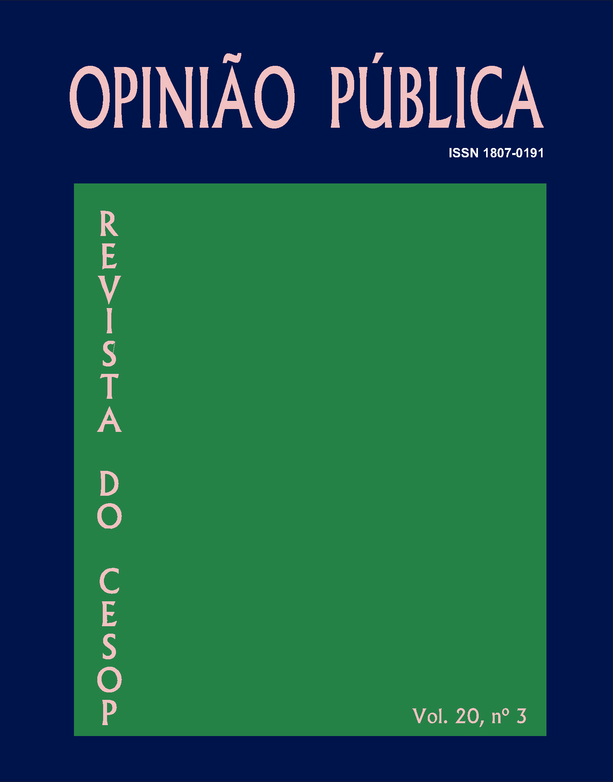 Determinants of the vote in the first round of the Brazilian presidential elections in 2010: an exploratory analysis

The objective of this article is to examine the effect of a set of variables on the vote of the main candidates (Dilma Rousseff, José Serra and Marina Silva), and on invalid votes in the first round of Brazilian presidential elections in 2010. The research is based on the results of “Estudo Eleitoral Brasileiro” (Brazilian Electoral Study) conducted in 2010. The data was analysed using a multinomial logistic regression model, whose results are also presented through graphics with the predicted probability. Among the selected variables, education, region, religion, party preference, self-positioning in the left-right scale and evaluation of government showed the most significant differences between the candidates. On the other hand, sex, age, and participation in the “Bolsa Família” program have limited impact on the differentiation of candidates.

PDF
Strategic use of alternating elections? Effects of candidacy for mayor on the vote of contenders for the office of federal deputy in Brazil

This article analyzes the use of candidacies for higher political offices, not only as evidence of progressive ambition, but also as a source of electoral benefits for the candidate. The argument is that alternating elections for different level positions in the federative system permit that even candidates who lost in mayoral races to take advantage of campaign coverage later in the race for a seat in the Chamber of Deputies. The hypothesis that this electoral return exists is tested by applying linear and maximum likelihood models on data from Brazilian federal deputy elections in 2010, taking into account their performance in 2006 and whether or not they ran for mayor in 2008. Results show that there are considerable late electoral benefits even for those who lost mayoral elections.

PDF
Classifying prior occupations to entry into politics: a methodological discussion and an empirical test

This article brings forward a discussion regarding the definition, classification, and measurement of social positions of origin for research on political elite recruitment. To this end we present several theoretical and methodological strategies to establish the variable “occupation prior to a parliamentary career” and argue in favor of a more analytical criterion than a sociographic one when coding the occupations of those who consider entering the political world. The argument that follows considers that political recruitment could be better apprehended by means of a typology that takes into account not only institutional variables but also, as suggested by Max Weber, social and economic variables. For the empirical test concerning the proposed criteria the data is based on candidates for a federal deputy seat in 2006 and 2010 so as to simulate the efficiency of an alternative classification. This classification is based on three parameters: 1) the flexibility of the candidate’s professional career (free time and financial autonomy), 2) the importance of this occupation in a given community (social status) and 3) the candidate’s previous affinities with the values and practices of the political world. The results revealed that social cleavages as well as gender cleavages may be enhanced due to the type of professional activity previously exerted by the political candidates even before institutional filters yield their effects.

PDF
Affirmative Action Policies and the List-Experiment: the case of race quotas in Brazilian universities

In this article, we adopt an indirect questioning methodology to measure attitudes toward the use of race as a criterion for admission in Brazilian higher education institutions. We hypothesize that attitudes toward such affirmative action policies cannot be measured by conventional survey questions because non-eligible students – mostly white students – may fear to appear prejudiced by showing opposition to them. This survey effect is known as the social desirability effect . Thus we adopt a list experiment to measure students’ sincere attitudes toward the race-based quota admission system. We find that white students do not over-report their approval of racial quotas in university admissions. But, the results show that quota eligible students, Afro and indigenous Brazilians, tend to overwhelmingly under-report their approval of race quotas. Specifically, eligible students strongly approve of the racial quota system (68.3%) when provided privacy in their responses, but publicly voice only timid approval of it (29.0%). We label this effect as the inhibition effect . Moreover, we did not find a social desirability effect among white students, contrasting with some previous findings in the U.S.

PDF
Identifying media-frames with correspondence analysis: an analytical model applied to the affirmative action controversy in the Brazilian press

The concept of framing is intensively used in media studies. However, it is usually employed in a fractured way. In despite of its semantics inaccuracy, also contributes to these problems the lack of formal routines to identify media-frames. This article proposes a routine to framing identification based on the combination between Computer-Assisted Qualitative Data Analysis Software (Caqdas) and Correspondence Analysis techniques. Such mixed method could clarify the formalization of media-frames without mechanizing the full process. To exemplify the usefulness of this technique, it’s applied to a corpus of journalistic texts about the affirmative action in Brazil.

This article brings a contribution to the comprehension of the path of recognizing the rights of children and adolescents in Brazil, in which there have been seen symbolic representations that often are created, modified or popularized by the media. Newspapers with the largest circulation in the state of São Paulo in a period after almost 20 year of the Statute of the Child and Adolescent (ECA) coming into force were investigated with framing analysis. Results suggest that the ECA faces obstacles to its consolidation, in the form of superficial and fragmented media coverage of events that should be contextualized in relation to public policies and their specific understanding of causes and possible solutions applicable.

PDF
Explaining the effects of civic education programs: the experience of youth parliament in Brazil

This article investigates systematically the changes generated by civic education programs on its participants, offering an integrated view of the determinants and the resulting effect patterns. Our main conclusions are: 1) values are more resistant to change than motivation, political knowledge and attitudes towards political institutions; 2) cognitive gains and attitudinal changes are more likely to occur (and with greater intensity) when the object belongs to the universe of experience related to the program; 3) effects on political participation do not occur in the present, but the data indicate a propensity latter in adult life; 4) very often, the quality of the program and the motivation of the participant determine the influence of other factors. The object of study is the Youth Parliament mineiro, in its 2008 edition. Our research design follows the logic of quasi-experimental research (C AMPBELL ; S TANLEY , 1979). In 2008, a non-random sample of 670 participants completed two rounds of interviews, 335 before and 335 after the program. We interviewed 167 participants and 168 non-participants.

PDF
Changes and continuities in the movement of human rights: organizational, relational and discursive patterns

This article assesses changes in the pattern of collective action of social movement arising of the effects of their engagement in participatory institutions of policy-making, considering three interdependent dimensions – organizational, relational and discursive. Institutional effects in the social movement are examined from the case study of the Center for the Defense of Human Rights of Serra, located in the metropolitan area of Espírito Santo, after 1990 through qualitative and quantitative method. The correlation between the institutional engagement of the movement and the changes in the pattern of collective action has effects of complexification organizational, pluralization of social network, and cooperation and contestation discourse in the society-state interaction.

Governance and the transformations involved in the conception of the public from an institutional perspective are addressed in this article. With this aim, an approach to the concept of governance from various authors is realized, arguing its distinguishing features with respect to the traditional public management in the modern state. Likewise, an analysis of the main arguments of the institutional perspective, with respect to changes in the public and political arena that the raises the governance approach is proposed, to conclude with some reflections, in general, about the governmental process in Latin America.

PDF
"The Americano Dream" or "The American Dream": The contemporary debate on Immigration of Mexicans to the United States

In this article I review the academic debate generated in the United States from the Huntington's arguments about Hispanic immigration, especially Mexicans, for this country. In his works “The Hispanic challenge” and Who are we? , Huntington argues that for demographic and political reasons Mexican immigrants not assimilate to American culture founded on the core Anglo-Protestant values, which will divide the United States into two peoples, two cultures and two languages. Empirical studies that tested here the empirical Huntington’s arguments denied them and the critical theorists conceive them doctrinal, because express a settler ideology and manifest conflict theory of cultural pluralism and the internal colonialism.