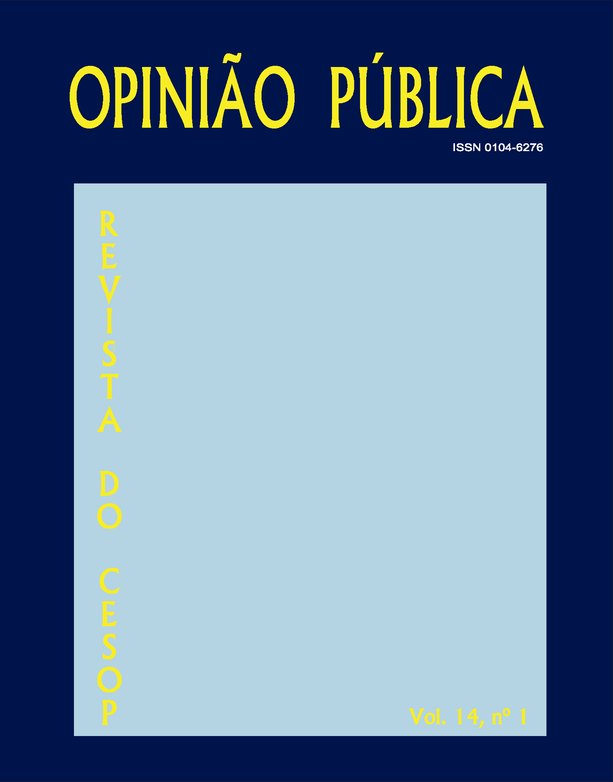 Democracy, Political Distrust and dissatisfaction with the regime – the brazilian case

This article analyses the individual basis of the contradictory relationship between levels of distrust to public institutions and levels of support to democracy and satisfaction with the democratic regime observed in Brazil. We discuss the concepts of legitimacy, satisfaction and political trust, and the methodological implications of this problem. We describe and analyse the impact of this aspects over the democratic adhesion. The study is based on the Latinobarometer series data from 1995 to 2002.

PDF
Participative institutions and institutional design: some thoughts about participation in the democratic Brazil

PDF
The diffusion of Brazil’s Participative Budget: should ‘best practices’ be promoted?

The “third wave” of democratization has been accompanied by the spread of new institutions that allow citizens to deliberate and decide policy outcomes. Leading international organizations, such as the World Bank and the United Nations, have disseminated “best practice” programs identified with “good government” policy reform efforts. One of the most well-known programs, Participatory Budgeting (PB), was first adopted by Brazil’s Workers’ Party (PT) in 1989 as a means to promote social justice, accountability, and transparency. There has been widespread adoption of PB in Brazil, led by the PT. Yet, by 2001, nearly half of PB programs had been adopted by non-PT governments. What explains why municipal governments in Brazil, especially non-PT governments, would adopt PB programs? This article estimates the probability that a municipality would adopt PB using logistic regression analysis to test a model that included electoral, economic, regional, and policy network variables. This article concludes by briefly analyzing whether governments that adopt PB are able to produce policy outcomes similar to the initial results that inspired the “best practice” label. This introduces the question: When should best practice programs be promoted for possible adoption?

The goal of the present work is to analyze the relationship between development and political power, as well as to evaluate political changes in municipalities in Brazil. The study is based on a data bank from municipal elections (Tribunal Superior Eleitoral, 1996, 2000 and 2004) applying a procedure which takes structural variables into account, such as size and quality of life in municipalities (IBGE/IPEA/PNUD), and ideology of political parties. The question is whether favorable geographic-political configurations exist for left or right wing parties. Our conclusion is that traditional political parties (right wing) find larger support in micro municipalities with bad quality of life.

PDF
Parliamentary reelection: methodological reflections and analysis of the local Chamber of the city of Pelotas (1976-2004)

This paper deals with the reelection issue and other variables related to it, such as desistance of running, running again and parliamentary renewal. Initially, the conceptual and methodological aspects of this line of inquiry. Later, it is centered in the case of the Chamber of Councilmen of Pelotas (RS), in the elections of 1982 up to 2004, with the objective of identifying patterns and trends that remain or that are modified along the time, as well as carrying through a comprehensive analysis of the political and institutional meanings of these phenomena.

PDF
A research agenda on e-democracy

The mechanisms of democratic participation provided by the new technologies of information and communication represent the possibility of widening the public space. The creation of channels such as online discussion foruns ans public consultations brings a promissing advance, but their results were not satisfactorily studied yet. This paper revises theories which have been supported investigations in this field, characterizes recent studies in Brazil and presents contributions to the an up-to-date research agenda, which considers the potential of the new technologies to the strengthening of democracy and indicates paths to evaluate if the technological support is adequately explored in order to help an effective insertion in the processes of definition and evaluation of public policies.

The article analyses the relationship between political journalism and democracy focusing on the recent Brazilian political scene. By analysing the editorials of the newspapers “Folha de São Paulo” and “O Estado de São Paulo” between 2003 and 2004, the authors show that, in spite of the different positionings in many aspects, the editorials of the two newspapers had focused on, above all, the members of the Congress and not the parliamentary institution. But, as they approached in negative way the members of the Congress, they fit negatively the proper institution. Thus, in a direct or an indirect way, he editorials of the two vehicules of communication had produced an especific image of the Senate and the Congress.

This article intends to analize the relationship between the city of Brasília´s youth and the institutional politics. We show what is behind the rejection to professional politicians and to the institutions they control. Instead of stereotipyze the critical behavior of the youth, we first analyze the context where this refusal takes place. We find an established democracy, with stable elections, but not corresponding to the expectations created during its implementation, added to a population that is well informed about the youth, it is necessary to ask if this lack of trust on institutional politics shows disconected worlds or a opened space to the emergence of new forms of political organization. This article is based on 2005 PNAD (National Research by Housing sample) data and the Youth Development Index of UNESCO, to describe the city of Brasilia youth, and on Electoral Supreme Court, about youth voting registering.