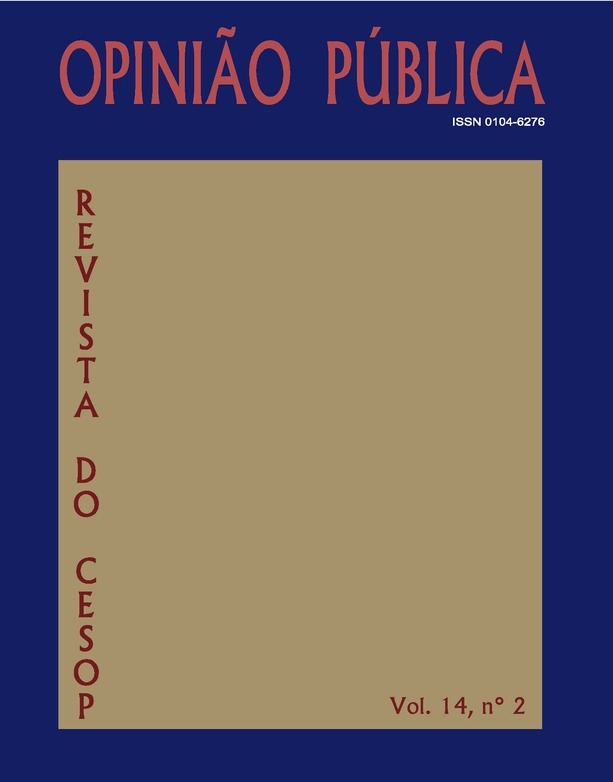 The voting of Lula in 2006 excited hypotheses on the repercussion of the public politics of the first mandate in the electoral results. The social programs of direct transference of income, in special the “Bolsa Família”, had been associates to the great growth of its voting in the cities poor of the north and northeast. We use concepts and methods of modern electoral geography to inquire which the participation of the “Bolsa Família” in this geographic change. The results show a new standard in the space distribution of the votes of Lula, confirming that he still receives the support from its previous bases, but disclose that the regional blocks of cities of high voting in 2002 had lost the cohesion in 2006, becoming more vulnerable. The results confirm the participation of the “Bolsa Família” on the local income was a determinative one of the new contour of the electoral-geographic basis, and the factor of big weight in the explanation of the municipal voting

On the bases of ESEB 2002 and in LAPOP 2007, the article analyzes the evolution of the bases of the support of mass to the PT since Lula took office in 2002. Historically, only the PT has been able to build and maintain a fairly large base of partisan "identifiers" among Brazilian voters. But, since 2002, the PT became more moderate and far less concerned with ideology and with the principles the party laid out in its early years and the article investigates the impact of the moderation of the PT's leadership on the "petistas". The results suggest that it had few changes in the bases of "petismo": a slight moderation and a small change in socioeconomic profile. They also indicate that the sentiment about corruption remains unimportant as a determinant of "petismo".

This article focuses on the political opinions of the Brazilian voters who express partisan feelings. The main goal is to verify if there is a structure in the political opinion of these voters which manifest partisan feelings and if there is variation along time as regards these opinions. The analysis is carried out based on four national surveys applied in different moments: 1990, 1997, 2002 and 2007. The analysis reveals that the opinions of the voters who express feelings for different parties were more differentiated at the beginning of the period established for the present study than at the end of this same period. This seems to be the reflect, in part, of the signals issued by the parties which hold smaller differentiation between each other at the end of the period.

PDF
Woman for president of Brazil? Gender and politics in the perspective of Brazilian voter

According to some authors, the modernization process, besides bringing about major changes in the social structure (such as industrialization, urbanization and all its related effects), also fosters changes in the system of traditional values and attitudes in the direction of emergence of the so-called modern values - secular and self-expression values. Among the latter, one would include the acceptance of the principle of gender equality. The goal of this article is to verify, through the analysis of the LAPOP-Brazil 2007 survey, the degree to which Brazilian citizens - part of a modern but recently democratized society - are favorable to the equitable participation of women in the formal political arena. The data show that, even though the majority in Brazil theoretically accepts the participation of women in politics, the rejection of the principle of gender equality, when occurs, is associated with social and moral conservative values and attitudes and with low support for democracy - which indicates that pockets of traditional, conservative and authoritarian values still predominates in the Brazilian society.

In this article we analyse the theoretical distortions that emerge when the Brazilian democratic construction process is analyzed utilizing exclusively the institutional approach. This approach does not explain the ambiguities between the emergence of a market economy and a passive and distrustful society of their elected officials and political institutions. In that context, adverse political conditions are produced that do not contribute for the democratic strengthening and the institutionalization of a participative political culture. The question to answer is: is it possible to develop political capacity of citizens through social capital as an alternative mechanism of citizenship? The results of the data examined in this paper are not too convincing.

The production and diffusion of political information must be included like priorities by political actors? Which are the advantages to democracy by active participation of the political institutions in the informational market? This paper presents some questions concerning the importance of the increase the flow of information from political actors to civil society.

PDF
The evolution of Brazilian party system: number of parties and voting at the subnational level (1982-2006)

The article analyzes the process of implementation and development of the Brazilian party system. In order to do so we analyze the electoral offer in the Brazilian federation from 1982-2006. The following variables will be considered: parties age, effective number of parties (ENP), and votes for Senate, Low Camber, State Governor and State Level Assembly. These procedures allow us to have a broad panorama of the Brazilian party system as well as of its development throughout almost three decades.

This paper aims to investigate one of the main roles of political parties in a representative democracy: to organize and to control the production of representation. In order to do that, two internal party processes will be examined: the setting and maintaining of the party’s organizational structure and the candidate selection for the Camara dos Deputados in the state of Sao Paulo for the PFL, PP, PMDB, PSDB and PT parties. The analysis is based on the idea that the more control political parties have over these two processes, the more vital are their party organizations in the representative dynamics.

This article analyzes some of the specificities of the political values of the entrepreneurial elite and its articulation with other socio-economic variables. This study centers on the state of Paraná, in the years between 1995 and 2005. With the application of a survey, we were able to collect information on the social background, the political trajectory and the political values of the presidents of some of the most important entities for the representation of entrepreneurs in that state. Besides the variables that relate to the recruitment of this elite, we also noted a rather strong cohesion in regards to democratic values, which does not mean the inexistence of diverging views, however. Therefore, the study of the political values of the entrepreneurial elite makes it possible to better comprehend some important characteristics of this social group, namely its views on democracy and democratic institutions.