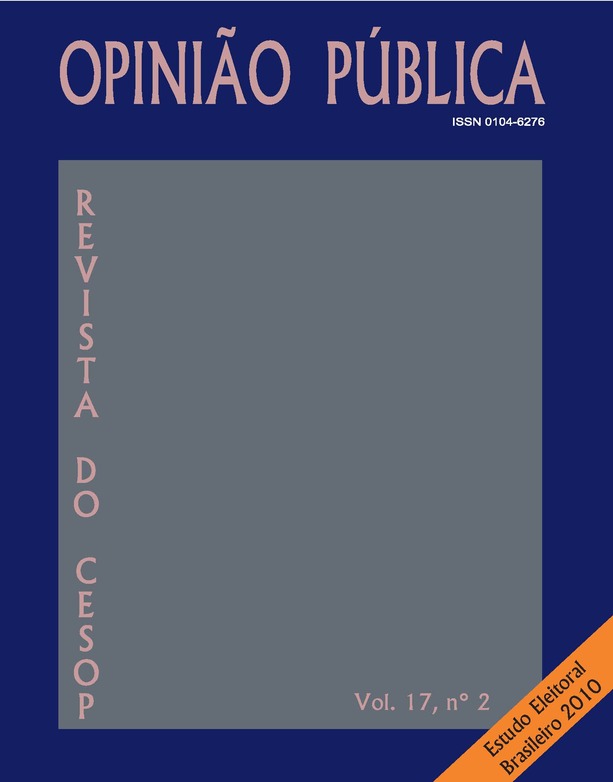 The Brazilian political parties do not really matter?

For decades the conventional wisdom in Brazil has been that political parties do not matter in explaining the behavior of Brazilian voters. However, this scenario of low partisan identification contrasts with the observation that, at least for presidential elections, electoral competition has been structured around two party organizations: those of the PT and PSDB. The aim of this article is to demonstrate that, even if parties are in fact not internalized in terms of party identification, we are witnessing an important division between two principal political organizations in terms of party preference, reflecting the emergence of a bipartisan system at the national level. On the basis of responses of interviewees about the presidential elections in the CSES-ESEB of 2002, 2006, and 2010, we see that in these elections the electoral affinities for the PT and PSDB are some of the principle components of an explanation of the vote. This article also emphasizes that despite the fact that party preference is more pronounced as a means of candidate selection for those with a high degree of education, it is possible to observe that even among those with less education this variable is fundamental to explain the vote, providing evidence that even for voters with less knowledge of politics, the parties are helping to structure the voting decision.

This paper analises the determinants of vote for Dilma Rousseff in the first and second rounds of the 2010 Brazilian presidential elections, based on various political, economic and social indicators. The study tests the traditional hypotheses about vote choice in Brazil, such as sociotropic economic voting, party identification, government evaluation, perceptions of corruption and religion. Our contribution comes from the adition of a new explanation for vote choice: perceptions of social mobility. Therefore, the present study captures a political effect of the upward social mobility of sectors of the Brazilian population, the so called “new middle class”. The article uses data from the CSES Brazilian Electoral Study (ESEB).

This article aims to contribute to the debate on the role of parties on the electoral choice in Brazil and intends to verify how party preference - which is measured through a scale of levels of preference - relates to socio-economic variables and with the decision of vote. The results indicate that the income does not explain the preferences of voters regarding parties, which in turn, also does not explain the vote for federal deputy. This seems to suggest that the literature regarding the decline of partisan identification and the weakness of the social links among parties and voters is correct.

This paper examines how the partisan feelings of Brazilian voters evolved between 2002 and 2010 and how these feelings relate to attitudinal and behavioral variables. First a general descriptive analysis of this evolution is conducted using data from the ESEBs (Brazilian Electoral Studies) of 2002, 2006 and 2010. Then, based on multivariate analyses and again on CSES-ESEB2002 through 2010, the positive partisan feelings about the PT and the PSDB are taken to be predictors of attitudinal variables (ideological identification, attitudes towards statism, equality and democracy) and votes. The paper finally shows that there are interesting differences among voters that express feelings towards the PT and voters having feelings towards the PSDB as regards attitudes towards relevant political issues. Moreover, the paper shows that these feelings are still strongly connected to voting for president.

The main objective of this article is to examine the recent debates about the factors that explain democratic stability in Brazil. Based upon the concept of political socialization it analyses the impact of elections on the strengthening of democracy and the importance of norms and values for the future of democracy. We think that presidential elections in the Brazilian case could be characterized as an important moment in the political socialization process. To test this proposition we use the data from the Brazilian Electoral Study (ESEB) conducted in 2002, 2006 and 2010. It is analyzed if age generates differences in the values and attitudes manifested by people, with more democratic experience leading, to the materialization of a political culture congruent with democracy, or if they are defined by the electoral context, analyzing the dimensions dividing population by cohorts by age, and by electoral choice in each turnout. We conclude that political culture has changed to support more democratic values, but the contradictions remaining indicates a hybrid culture that does not favor a poliarchic representative democracy.

The aim of this article is to evaluate the oscilating wave of party identity, to explain the changes of the characteristics of the electorate, in what relates to the level of education, ideology and region, and to contribute to the debate about party identity chagings among different social groups. The profile of voters with party identity Brazil in 2010 shows higher levels of education than in 2006, is more located in the Northeast and North/Centerwest regions and is more conservative than in other periods.

PDF
What was the role of the media variables in the presidential election of 2010?

In this article we present the results of a preliminary study about the effects of media variables on the voting decision process at the 2010 presidential election. The results from logistic multinomial models estimated with ESEB 2010's data suggest that two of the five variable used here – debates and political awareness – influenced the voters' decision in favor of Serra and against Dilma respectively in the first and second rounds. At the same time two other variables presented counterintuitive results: a greater exposition to traditional press and to the program Brasil Urgente increased the probability on part of the electorate to defect or to cast blank and spoiled votes instead of voting on Dilma. Even though this is an initial analysis, the results are closer to the visions that defend a more active role for the media during the elections than with those visions that call for the media's irrelevance.

The analysis of the 2010 Presidential elections shows a divided electorate by regions, following the Brazilian map of inequality. The main campaign issues were the continuity of President Lula and the social programs. This article investigates the relationship between social programs and voter decision, and the role of region as a variable of explanation. The analysis is based on the CSES-ESEB2010 data.

PDF
The new consensus in Brazilian society: democracy and equality

This article investigates the convergence of opinions between Brazilian elites and population about the policies of reduction of poverty and inequality. The international literature is divided in two groups, one that affirms opposite visions between elites and mass towards this issue, and one that sustains that the difficulties that democracies face to reach economic and social development lead to a consensus, in which social policies for poverty reduction are critical. The analysis compares the results from CSES-ESEB 2010 to research data came from an elite survey conducted in 2009. The results support the idea that there is a social consensus between elites and general population.